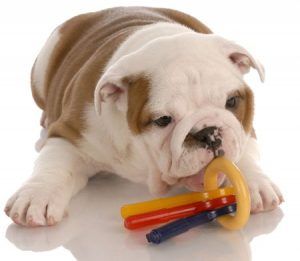 There’s no feeling more joyful than bringing home your English bulldog puppy. The first few weeks are all cuteness and cuddles—and then comes teething. Puppy teething usually begins when a puppy is three to four months old, and lasts about two to three months. During the teething phase, your puppy’s gums may become red, swollen and irritated, leading them to chew on everything in sight in search of relief. Fortunately, there are ways you can help. Here’s how:

Redirect your English bulldog puppy’s chewing urges so that they chew designated toys instead of your furniture, carpets and clothing. Look for toys that are made of hard rubber and/or toys that can be filled with dog biscuits or peanut butter. However, don’t give the puppy too many chew toys at once, or they may think they can chew on anything indiscriminately.

A tug-of-war toy such as a sturdy rope can give your puppy something to chew on while also offering an opportunity to bond with their human companions.

Chewing on something cold can help relieve your puppy’s discomfort during teething. You can buy a specially-made cold chew toy, freeze a wet rag or even give them frozen carrots for them to chew on.

Now that you know more about how to relieve your puppy’s discomfort during the teething phase, it’s time to meet your new best friend! Over the course of the past three decades, Cedar Lane Bulldogs has earned a reputation as one the finest, most well-respected English bulldog breeders in Oklahoma. Give us a call at (405) 329-0066 to learn more about our dogs today!